The BJCP provides a fairly simple description of this complex and varied beer style, describing it as “traditional artisanal ale from Northern France brewed in early spring and kept in cold cellars for consumption in warmer weather.”

However, if you really want to get beer-nerdy and dive into the full histoire of this storied French contribution to craft beer, you must consume Phil Markowski’s Farmhouse Ales: Culture and Craftsmanship in the Belgian Tradition. This book describes everything from the history of the style, to how saison and Bière de garde intersect and differ, to how to brew variations of these classic farmhouse styles. I won’t attempt to summarize the entire book here, but I find that this quote particularly captures the voice of the author and his obvious passion surrounding these styles:

“Bière de garde is the most notable French contribution to world-class brewing. Present-day interpretations are broad and varied; the best examples are malt-accentuated without being cloying.”

The style originates from northern French farmhouses, where the beer was brewed for consumption by farm hands. It was quite low in alcohol so that people didn’t just pass out in the fields and instead continue to be productive workers throughout the day. Smart!

The name translates to “beer which has been kept or lagered,” which I faithfully did with the four examples below for approximately one week in my electric refrigerator, just like ye olde farmer might have done in Lille, France back in the day. Yeah, just like that.

Modern Bière de garde is “a fairly strong, malt-accentuated, lagered artisanal beer with a range of malt flavors appropriate for the color. All are malty yet dry, with clean flavors and a smooth character.” (BJCP) The style can have much variation in color, but the three main categorizations are brown (brune), blond (blonde), and amber (ambrée). The common thread between all variations is that this is always a malt-focused beer. Saisons can be similar, but the Bière de garde is rounder and richer and lacks the spicy, bitter character of a Saison (BJCP).

I drank the following four examples: 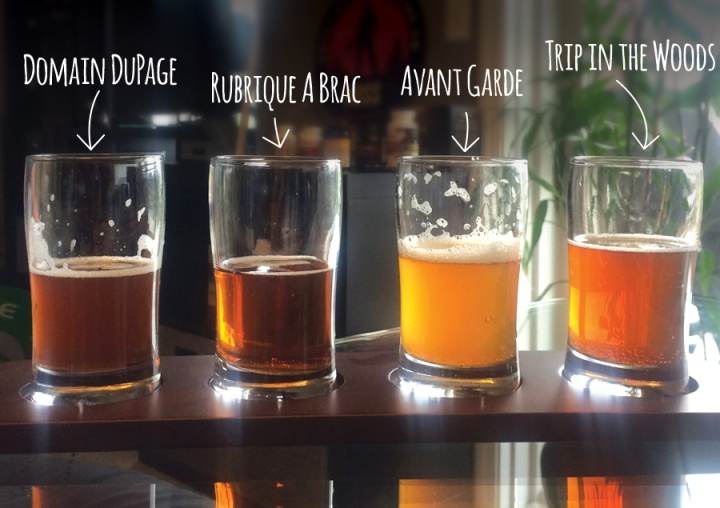 From light to dark color the beers were Avant Garde, Rubrique A Brac, Trip in the Woods, and Domain DuPage. All had fluffy heads of billowy bubbles, especially Rubrique A Brac.

Domain DuPage (Two Brothers Artisan Brewing) 5.9% ABV
This earthy amber-colored version has won quite a few awards in its category, and definitely lived up to its critically-acclaimed reputation:

Avant Garde (The Lost Abbey) 7.0% ABV
For whatever reason, the brewery’s website refuses to classify this beer as a Biere de garde … uhhbutitisone. It was the lightest in color of all the examples, and the lightest to drink.

Trip in the Woods (Sierra Nevada Brewing Co.) 9.8% ABV
This example was an anomaly among the group as it was the only barrel-aged version, and the beer was very different for it, and remarkably boozy. It was also really difficult to find much info on it, but of all places, I found the following from Total Wine: “Aged in Tawny Port wine barrels our Biere de Gard offers bright notes of stone fruit balanced with mellow toffee flavors and a smooth, round mouthfeel.”

Finally, I’d be remiss not to shamelessly mention my husband’s recent and related accomplishment at this year’s Great American Beer Fest. This year, Matt had a heavy hand in creating and brewing Horse Thief Hollow’s award-winning example of this style, Biére de Voleur (“Thief’s Beer”), the 2017 GABF Silver Medal Winner in Belgian- and French-Style Ale. I added the tasting notes below for love and science reasons:

Cheers, and thanks for reading!

THEY’RE DIGGING IN THE WRONG PLACE @fobab #fobab #fobab2019
#Repost @brewwildsydney with @get_repost Check out this badass wild beer homebrew competition, Brew Wild, happening Down Under in late July. I’m sponsoring this event, along with a huge list of amazing craft beer icons. I am so flattered to have been asked to support such a cool event. Cheers!!! ・・・ Last but most definitely not least our final supporters for #brewwildsydney @worth1000beers has provided a beautifully illustrated art print which will form part of the prize pack for our champion brewer. Matt Miller @dr_lambic will provide one on one support to the best of show winner @grogtag is providing labels for the best label design and finally @russianriverbrewingofficial have provided an official recipe for sanctification which will once again go to our best of show. Goes without saying but we have been blown away by the support we have received. #sourbeer #wildbeer #homebrewingexperience #instabeer #beertography #beerstagram #beersofinstagram #craftbeer #craftbeerstagram #craftbeertography #craftbeerporn #instabeerstagram
Are you in the #Chicagoland area? Then you’re in luck because I dropped off a boatload of goodies at @collectiv5743 this weekend, including these #handmade felt hop ornaments [$8] and upcycled bottlecap magnets [$1 ea.], ONLY AVAILABLE AT COLLECTIV! Collectiv on Irving Park in Portage Park has an amazing selection of local, handmade goods for everyone on your list. Plus, there are still #craftbeer prints available there and in my online store. Link in profile! #treatyoself or someone else!
Thanks to everyone who came out and purchased something or said hey at the @dovetailbrewery #Holiday Market! If you were there you already know—there are new **3D** products in my shop (link in profile) and more coming in 2019! It’s been a crazy year in the best way, and it felt so great to get back out into the crafting community this weekend as a #maker. Thank you to Dovetail and their entire stellar staff for putting on an event that gets more fun every year. I’m so grateful to be a part of it and I can’t wait till next year’s event!
%d bloggers like this: