This year, I attended FoBAB (The Festival of Wood and Barrel-Aged Beers) in two capacities, both as a fest-goer and as a volunteer. I drank my way through FoBAB on Friday night (6-10pm), and returned on Saturday night to pour beer samples (6-10pm) and help with tear-down (10pm-2am).*
Matt also attended as a fest-goer, a VIP guest, and a volunteer. So together, we amassed a pretty cool collection of baller FoBAB admission bracelets: 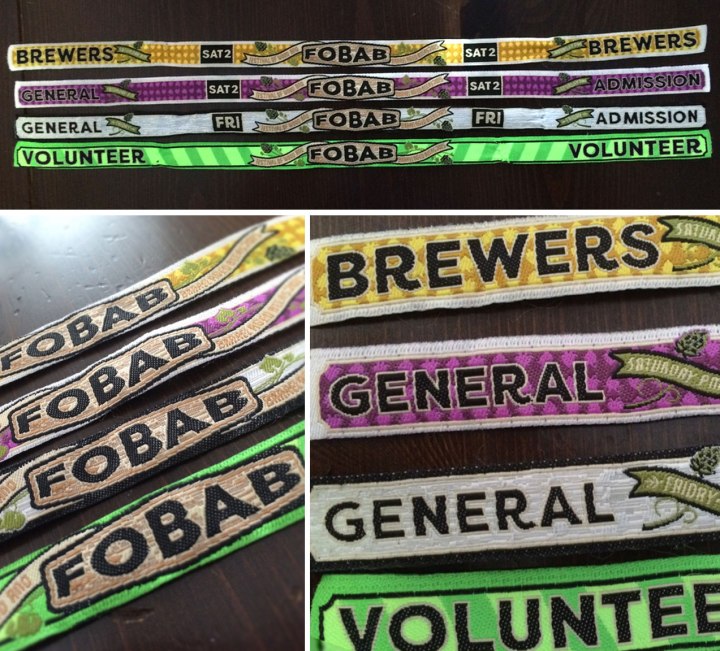 Part 1: Festing
This was my second year attending FoBAB (1st timer recap here), and I noticed a clear behavioral pattern among attendees that was repeated from last year’s fest. I would like to present to you The Five Stages of a FoBAB Session, as experienced by an anonymous friend (definitely not me):

Denial (6pm)
As the bagpipes began to play, she said, “THIS year I will not get overwhelmed by the hundreds of delicious beers. THIS year I will calmly sample only the chosen few, socialize, and stay hydrated! No problem!”
Strolls away, chatting with old friends, making new ones, photobombing strangers, and sampling a beer here and there. Calmly.

Anger (8:45pm)
“HOW can ANYONE allow this many good beers to be contained in one fest!?! This is ridiculous! Where did the time go?!”
Runs away, determined.

Bargaining (9:53pm)
“OK, there’s seven minutes left. If I skip the rest of the Sour Room and don’t go to the bathroom even though I am leaking out the eyes, I can definitely get five more samples!”
Stumbles away, arms flailing, panicked.

Depression (10:01pm)
“I can’t find my second glove, or my phone, or my coat check ticket.”
Finds phone in hand. Calls an Uber.
“I didn’t even know that Perennial was here, and I totally missed the Revolution Oasis!”
Runs away weeping a little, climbs into the Uber to Ogilve Train Station. Stops in her tracks, “OoooOOOooo Taco Bell!”

Acceptance (Sunday morning, 10:45am)
Awakes, “Welp. That was fun. I made 15 new friends. I high-fived the head brewer of Noon Whistle. I didn’t even get to smell Desthil’s Dosvidanya, but that’s OK. There’s always next year. … Hey, where’s my coat?”
Lies back down on the couch.

In all seriousness, as an attendee, the fest was as delicious and fun as always. 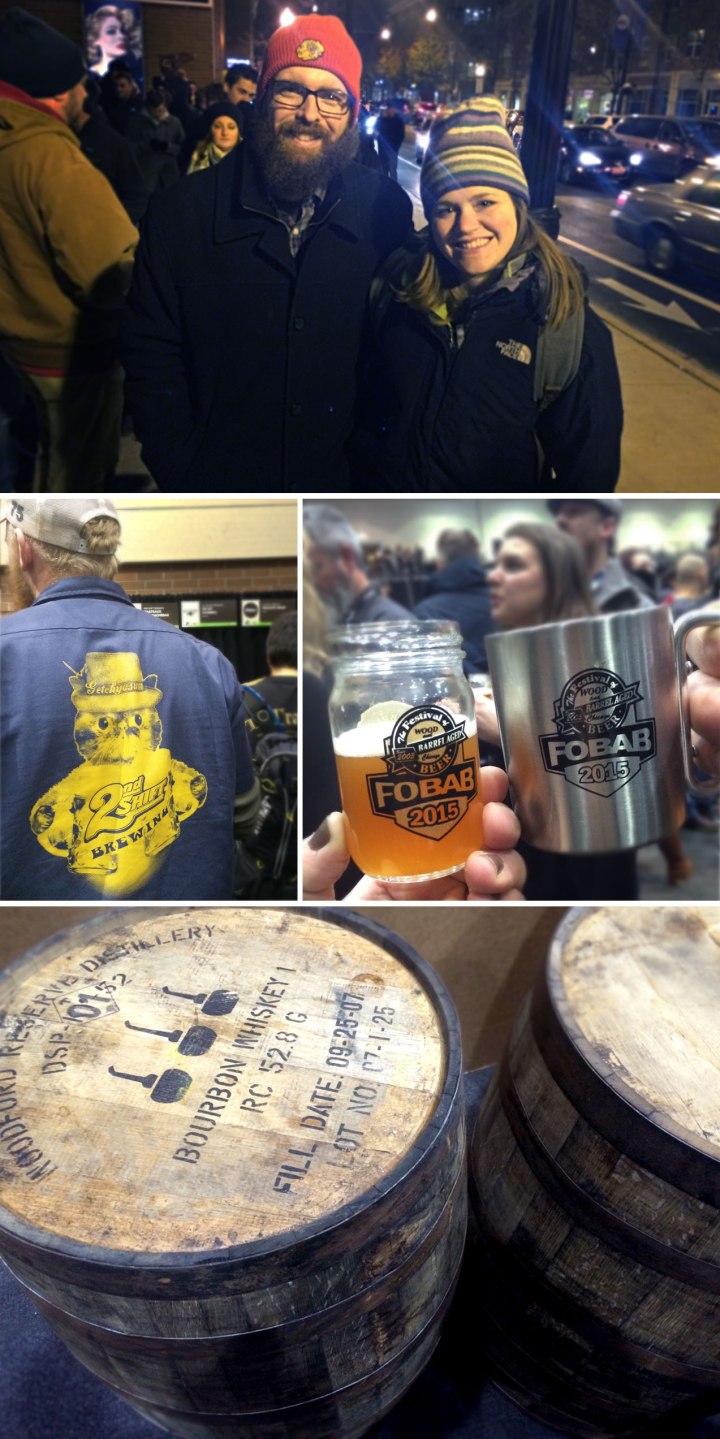 My top 5 favorites were:
1) Pipewrench (Gigantic Brewing)
This Ransom Old Tom Gin barrel-aged pale ale was light, refreshing, hoppy and botanical. It also won a Gold Medal in the Pale Strong Beers category. This was similar to my #3 pick, but much more balanced and subtle in flavor.

2) Barrel Aged Dark Secret with Raspberries (Brickstone Brewing Company)
Winner of the Silver Medal in the Specialty Strong Porter/Stout category, this knocked my socks off. After I put my socks back on, raspberry, coffee, and chocolatey bourbon aromas filled my nostrils. These same flavors covered my tongue and pranced down my throat. Deliciously syrupy, fruity, and phenomenal.

3) Gin Barrel Aged Pony Pilsner (Half Acre Brewing Company)
This hoppy pilsner was aged in Corsair’s gin barrels and boy could you tell. If you haven’t figured it out yet, I am someone who LOVES gin and this beer spotlighted its botanical flavors beautifully on a base of clean pilsner. I tasted lots of refreshingly juicy lime and juniper; it’s not surprising this beer won Gold in the Classic Beer category.

4) Whiskers (Off Color + Central State Brewing)
This American Wild Ale collaboration was inspired by Rosé wine and aged in puncheon** barrels. It was etherial and fluffy, with flavors of tart grapes, pineapple and pear, and had a lovely dry finish. It also won a Silver Medal in the Wild Beers/(Acidic) Sours category.

5) Single Tree Hickory (Scratch Brewing Company)
Fair warning: I am about to gush compliments for the only beer on my top 5 list that didn’t win a medal. Scratch is such a unique brewery, and I was so excited that they were FoBAB participants this year. Matt and I visited their brewery a couple of years ago and were blown away by what they’ve achieved by foraging for ingredients and brewing over a wood fire. Anyway, this semi-tart beer was my first pour of the night (I may have made a beeline for their taps). To make this beer, the Scratch crew gathered and toasted the bark and branches from a hickory tree near their woodland brewery and created a dark and roasty stout that was lightly tart, subtly cherry-flavored, campfire smoky, and smooth. It was aged in blue corn bourbon barrels from Wood Hat Spirits.

• Scratch Brewing Company always impresses me, and while their Forest Porter wasn’t among my top five, I really admired the soft touch of subtlety in this light-bodied brew made with sumac berries, wild cherry bark, and white oak. Brewer Marika Josephson told me that the beer’s subtle cherry flavor came entirely from the wild cherry tree’s bark and that no actual cherry fruit was used in the recipe. Amazing work!

• I also had the pleasure of tasting F.E.W. Spirits‘ Barrel Gin that was being sampled out in the brewer’s room. As I mentioned before, I am a gin fan, and this ranks among the best gins I have ever tasted. It’s incredibly flavorful, warming, and not at all harsh with juicy lime and citrus flavors that mingle with herbal juniper. AMAZING!

• Finally, I would be remiss to not mention Cheval Deux Barrel Aged by Horse Thief Hollow in south suburban Beverly, IL. To be fair, this is a biased plug; Matt is working at HTH in Beverly as a cellarman, and is currently learning the brewhouse. He assisted Head Brewer Dave Williams in blending this oak-aged beer and I couldn’t be more proud! They added toasted oak chips to this sweet potato-infused Bier de Garde, imparting a delicious depth of flavor to this slightly tart, spiced beer.

Part 2: Volunteering
So, how was my experience as a volunteer? In a word: awesome. It was easily the most fun I’ve had donating my time and effort to any cause, and in return I was given free entry to one of the greatest beer events of the year. Schwing!

Considering its size and duration, this fest runs as smooth as silk from the guests’ point of view. Behind the scenes, I experienced only a minor inconvenience upon my arrival Friday night when I learned that my name wasn’t on the volunteer list, despite having received a few confirmation emails from the FoBAB team. However, the organizers had no problem making note of this, and letting Matt and I in for our free Friday session. When I returned to the fest on Saturday night, there was still no record of Matt or I on the list of volunteers, but they were happy to accept our help. In the grand scheme of the weekend, this hiccup really had no effect whatsoever on my excellent FoBAB experience.

As a volunteer I was well-fed, well-watered, well-beered, and even given some freedom to choose (within my assigned area) what I was going to pour. I was assigned to the Classic Styles Section, and chose to serve the Logganbier from Chicago’s own Metropolitan Brewing (a delicious rye lager–Roggenbier–that was aged in rum barrels). It was a lot of fun pushing Metro’s beer; I was incredibly proud to serve such a well-made, classic style example brewed in this city, to people from all around the world.

Matt was attending this session as a VIP through Horse Thief Hollow, and was thoughtful enough to bring me a few pours throughout the evening, including a special surprise. This mystery beverage tasted like terrible whiskey that had been dry hopped with cigarette ash. The flavors lingered on my tongue much like a freshly-chewn Aspirin. I could not un-taste this nightmarish beer.  It turned out to be Malörted Imperial Stout (Lunar Brewing Company). Lunar’s mad scientists soaked some oak spirals in Jeppson’s Malört, then added them to their Imperial Stout. (If you’re wondering what Malört is, watch this.)

Some people liked it, though:

… and some people didn’t:

As soon as the fest ended, the volunteers immediately began tearing it down. With a rush of carbon dioxide the kegs were disconnected, plastic tablecloths were untaped and discarded, and happy, drunken guests were shooed away. Cleanup was methodical and relatively quick; Matt, myself and the other late nighters were done with fest breakdown just 4 hours later, sleepily departing for home at 2am instead of the rumored 5am end time.

An impromptu bottle share commenced as the fest cleanup wound down, and while I couldn’t tell you what I tried, I can tell you that it tasted good after a hard day’s work.***

*That’s right–I volunteered for two shifts in a row, night and overnight. Having completed the work I now realize that this was … excessive … but I was assigned to the overnight shift and really wanted to pour beer for fest guests, so I volunteered for the second slot that would allow me to play bartender. I regret nothing!

**What exactly is a puncheon barrel? I did some brief research (AKA, I tweeted at Off Color and Central State Brewing. Thanks, guys!), and was lead to Wikipedia to find that “puncheon” is traditional English term for a large oak barrel used to age wine. The term specifically refers to the size of the barrel, and is notable because of the volume-to-size-ratio, resulting in a beverage that could pick up less oak character than it might in a relatively small bourbon barrel. Here’s a graphic from Wikipedia that shows its size comparison to other traditional barrel sizes:

*** At no point did I feel like I was actually “working.” Even while hauling kegs and buckets of ice water at 1 a.m. (OK, maayyybe that felt like work.) Can’t wait to do it again … though next time, one shift should do the trick. I still regret nothing!